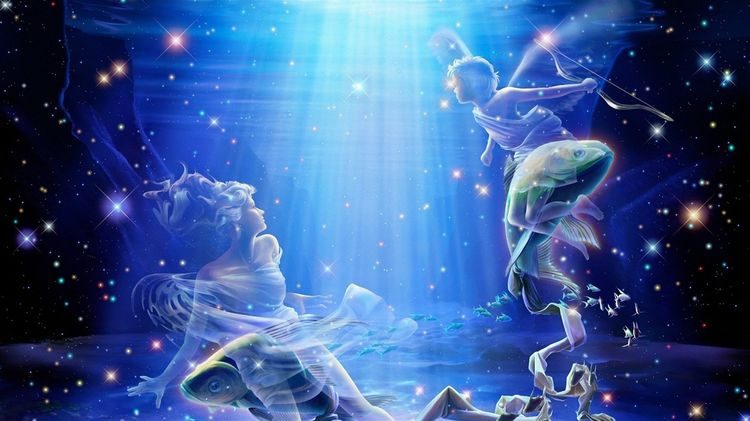 This is a good match because Taurus is a good and stable provider, while Pisces is in need of such a source of stability. Taurus may initially be attracted to Pisces because of this need. However, Pisces has some very valuable things to offer a Taurus partner. Pisces’ ability to visualize things as they should be (as opposed to the way they are) will help Taurus to be more creative. And it goes without saying that Pisces’ love of the arts will give Taurus a stronger appreciation for things that can be admired as well as experienced. In bed, this can be a very pleasant combination. Taurus’ sensuality can combine with Pisces deep emotions to create the kind of lovemaking where the partners lose themselves in one another. As long as Taurus doesn’t become overbearing, this relationship can be a beautiful experience for both partners.

This can be a surprisingly good relationship, largely due to Pisces’ ability to follow Gemini’s thoughts and become engrossed in Gemini’s world of strange ideas. Gemini will be taken by Pisces’ artistic modes of expression, and will perhaps even envy Pisces’ ability to process reality in an abstract, yet emotionally deep and rewarding manner. Pisces’ compassion for the world will make it easy for Pisces to understand Gemini’s need to be around a wide variety of people. Gemini’s absences will give Pisces much-needed time to explore a private world and altruistic projects. Gemini will sometimes wonder why Pisces can’t take a more self-centered approach, but on the whole this relationship will be easy to maintain. Sexually, as long as Gemini will reciprocate Pisces’ generosity, intimacy can be extremely satisfying.

This twosome has an easy time getting along, but unless they’re careful they could both become too lethargic. Cancer loves taking care of Pisces, because Pisces is sensitive enough to show appreciation for all the things that are being taken care of. Pisces likes to sympathize with Cancer, and will listen to Cancer’s ideas about improving the couple’s sense of security for hours. The problem that might arise is a lack of practical energy. These two could build a lovely castle in the air, but the question is, would there be walls on it? These two need to work hard on finding and dealing with reality, and they also must work on maintaining safe boundaries both within and outside of the relationship. Sexually, once this duo finds out how completely they can satisfy one another, they may never emerge from the bedroom.

These two signs meet on a heart level, and can create a very rewarding union. Leo is generous and energetic, while Pisces is altruistic and reserved. Leo can bring the best out in Pisces, and Pisces can soften and broaden Leo’s impulse to give. This couple can easily draw on one another’s strength to enhance their relationship and enrich themselves through the time they spend together. Once the magic wears off, they might fight about the very things that make them so fascinated with one another. Leo could become exasperated with Pisces’ lack of focus, while Pisces could see Leo as being insensitive at times. But as long as this couple remembers that their connection comes from the heart, their sexual experience will be strengthened by a soul-level connection.

These two signs are meant for one another, even though they might be the last ones to figure that out. Virgo’s always looking to make someone into a “little project” to work on, and Pisces could definitely use some help getting organized. Meanwhile, Pisces can provide many creative ways for Virgo to escape the rut that results from so much concentration on the details of day-to-day life. They’ll enjoy doing things together because they will point things out to one another that add depth to every experience. The fights they have will flare up when either of them goes too far into their archetypal behavior. In this relationship, earth meets spirit, and both are focused on providing service. As long as they stick to that, their life together will have a fairy tale ending that they’ll confirm every night they spend together.

This combination can work well, especially if both the people have reached maturity. Libra’s desire for fantasy romance can easily be satisfied by Pisces, who wants to experience love and sharing on a soul level. Sometimes Libra might seem cold and uncaring to Pisces, while Pisces will seem hypersensitive and flighty to Libra. There could be fights over whose feelings get hurt more easily, but when the spat is over, the making up (especially the part that takes place in the bedroom) is legendary. This is the kind of couple that sits around staring in each others eyes for hours – even many years after their first date.

Although these two will have a firm friendship, staying together as a couple can be challenging. Scorpio wants to have someone who is strong and self-sufficient, while Pisces people would be the first ones to admit that they like to have people take care of them. Scorpio’s secretive nature could injure Pisces’ fragile self-esteem, and provoke a whole series of paranoid fantasies about what Scorpio is “really” up to. The key to making this relationship work is honesty. Both partners have to dig deep into their vast wells of emotion and put them out in the open. Emotional responses and overreactions, real and otherwise, will be at the root of most conflicts. If they can resolve their differences, these two can experience an active sex life that’s satisfying on deep emotional levels.

This can be a good relationship, as long as Sagittarius and Pisces are both willing to tolerate the parts of one another that they find difficult to admire. Sagittarius can be brusque and boisterous, while Pisces is delicate and refined. In some ways this couple can bring the best out in each other, but they can also become annoyed with what they perceive to be their partner’s shortcomings. It will be especially hard when these two try to interact with their friends as a couple. They might have a difficult time being themselves when they’re faced with making the compromises they need to sustain the relationship, and friends can contribute to the couple’s quibbling. In bed, Sagittarius will have to go slow with Pisces, and may be put off by what could be misinterpreted as Pisces’ coldness. If the couple can open up to one another, they’ll find that they have the purest hearts in the zodiac, and they can enhance their own lives through a vigorous sexual union.

Capricorn and Pisces are quite different, but this might actually allow them to develop a very rewarding relationship. Capricorn would be an ideal mate for Pisces, providing Pisces with grounding and practical advice. Pisces would be good for Capricorn, helping Capricorn to learn and understand the emotional component of a happy life. Conflict could arise when Capricorn gets too busy to tend to Pisces’ needs, or when Pisces becomes scattered and is unable to be there for Capricorn in a crisis. If these two can develop the kind of sensitivity they need to give themselves to this relationship, it can be long-lasting. Sex can be extremely good with these two, particularly if Pisces is willing to experiment with new levels of arousal, and Capricorn can open up to the Pisces’ deep emotional being.

This is a delicate relationship, so both partners must handle it with care. If Aquarius is particularly taken by Pisces, it would be easy for Aquarius to get lost in Pisces’ tendency to find people, animals and causes that need nurturing and make them into a personal crusade. Pisces, meanwhile, might find that Aquarius is not particularly tolerant of sensitivity and irrationality. Of course, these two have much to learn from each other, and if they can be open to discovering their distinct personality traits, they can both grow through the relationship. Sexually, Aquarius will adore Pisces’ gentle touch and deep devotion, and Pisces will delight in the way Aquarius shows appreciation.

Two Pisceans can make a very good life for themselves, as long as at least one of them has developed some practical skills. They will be able to sense that they are in the relationship in order to complete themselves, and they will look to one another for a refuge from the world’s hard realities. If these two argue, it may be because one thinks the other one doesn’t understand them. Usually the disputes can be resolved when each of the partners asks for what is needed in clear language. As simple as that sounds, it isn’t all that easy for any Piscean to achieve. But when it comes to sex, these two are able to merge with one another and transform themselves until they reach a state of being few of us will ever be able to experience – at least in this lifetime.

Blind Dates: The Basics of Meeting A Stranger

How to Flirt: Flirting Tips Help You Show Interest

Asking A Girl Out For A Drink

7 Essentials on Flirting With An Older Man:

Tips For Dating A Jewish Man

How To Use Reverse Psychology On Men

20 Flirty Things To Say To A Girl

How To Date A Muslim Man

How To Kiss A Girl For The First Time?

How To Ask Your Friend To Be Your Girlfriend